Eddyne Irankunda and Evelyne Kanyana have provided a brief update on their project.  At the time of their First Year report, the two female pigs were pregnant and the project was expecting about 14 new piglets. The project managers planned to invest some of their own money to cover the costs of caring for the pigs.  They were planning to sell the big male pig in order to produce some money to continue feeding the pigs.  The project managers were planning to keep two of the piglets, sell about nine of the piglets and place a piglet with each of three local families and share in the next generation of piglets.

The big male pig has been sold.  One of the female pigs has had seven piglets.  At least one of the project managers will be seeking advice from a man who has many pigs and piglets and lots of knowledge and experience.

A church in Kinama, near Hope Africa University, provided a building for free, providing the project would rehabilitate it.  From her own funds, apparently, the project manager had some bricks made for the building. 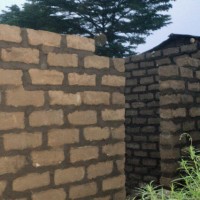 In addition to the three project sewing machines, she somehow purchased two additional machines; a zigzag machine and serger machine.

The project has new trainer and some needy women ready to participate in the restart and renewal of the project as it heads into its second year.

The African Governing Committee has completed an extended process of reviewing, selecting and recommending projects for funding.  Three new development projects have been approved for funding through the Student Grants Program of the Haley McCready Outreach and Development Fund.  In the near future, the projects are expected to receive the related funding and, then, an announcement will be made, the projects will be described and implementation will begi.